Attorney Rob Coleman Participates at one of the Salvation Army Stations in West Little Rock, AR 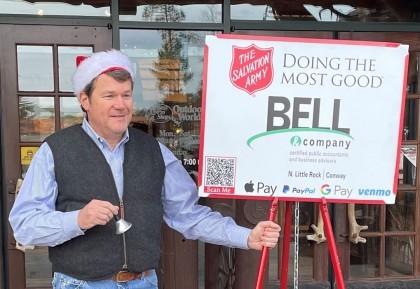 SettlePou attorney Robert Coleman was back out this year with The Rotary Club of Little Rock Afterhours ringing bells Friday and Saturday for the Salvation Army red kettle stations in West Little Rock. Please remember the bell ringers and the Salvation Army when stopping at your favorite stores. The organization helps those in need 365 days a year and there are 7600 centers of operation in the United States. The red kettle campaign raises millions each year with 3 million people volunteering annually. The Salvation Army provides aid with disaster relief, operates a missing persons program and job referral program, provides visitations to people with special needs in hospitals, nursing homes and correctional facilities, and so much more.